Capstone Berger Picards - CKC, UKC and AKC registered Grand Champions and Champions
The Berger Picard is a wonderful and enchanting breed, however just like any breed of dog, it is not the right breed for everyone.

The Berger Picard is considered to be the oldest French herding breed, and was developed in the Picardie region of France as a herder and guardian of sheep. Its rustic, tousled appearance, playful demeanor, and irresistible smile have charmed dog lovers for many years. Its name is pronounced 'bare ZHAY pee CARR', and it is alternatively known as the Picardy Shepherd, Berger de Picardie, or Chien de Berger.

The Canadian Kennel Club accepted the breed in 1992. In 1994 it was UKC recognized, and it entered the AKC FSS program in 2007. In January 2013, the Berger Picard took its next step toward full recognition by AKC and was added to the Miscellaneous group. The Berger Picard remains rare. According to recent estimates, 3500 are registered in France, about 500 in Germany, and 300 in North America.

The Berger Picard is still very much a working breed and requires training and activities to keep its mind stimulated. Behind that adorable scruffy face and giant rubber nose is an extremely intelligent animal, but they often have a mind of their own and can be stubborn about performing a learned task if they see no point in it. They typically dislike repetition, so a creative approach to training, lots of patience, and positive reinforcement methods combined with motivational training works most effectively for this breed. They are very sensitive, and their feelings can easily be hurt when handled incorrectly. They do not respond well to harsh physical corrections. The Monks of New Skete have described the Berger Picard as a curious mixture of sensitive and belligerent, and we find this to be delightfully appropriate. A sense of humour is the most essential resource when working with these whimsical and capricious characters.

As a herding breed, Berger Picards are lively and energetic and are happiest when they have a job to do. They are very versatile dogs, capable of just about any task or skill set to them. Picards can be seen do herding, nosework, obedience, agility, lure coursing, rally obedience, dock diving, flyball, skijoring, search and rescue, and even weight pull. Plenty of exercise and mental stimulation is important in order to avoid destructive, bored behaviour. Berger Picards are typically lively and playful outdoors, yet most are quite mellow and quiet indoors. They have good self control and are generally able to keep their exuberance contained until they are given the opportunity to romp. Several games of fetch, a nice long jog or walk, and space to run around each day will make for a happy Picard. They love to run, and many enjoy lure coursing wholeheartedly. Their herding instinct remains strong and they will try to herd moving objects, whether that is a child, another pet, bicycles, or cars. They can also have a strong prey drive, which can lead to issues with smaller pets unless the Picard is raised with or heavily socialized to these animals.

As guardians of sheep, Berger Picards can be somewhat distrustful of strangers and may approach them with caution. They are always watchful of their surroundings for unusual or unfamiliar things, and can be quite protective of their territory and family. It is very important to socialize a Picard puppy extensively. This means exposing and introducing the pup to a wide variety of places, sounds, smells, people of all ages, sizes, and of both genders. This is especially necessary because the Muppet-like, scruffy appearance of the Berger Picard attracts many enthusiastic admirers, and they will make new friends everywhere they go. They are often recognized from their role in a 2005 movie, Because of Winn Dixie, and their fans assume their personality will be just like that of the fictitious dog in the movie. Although most Berger Picards are not Winn Dixie, with positive training and consistent socialization, a Berger Picard will grow to become a well adjusted, sweet tempered, and confident companion with a loving disposition and a charming sense of humour.

A Picard typically lives 12-14 years. They form a very special and intense bond with their people, and deserve a lifetime of caring commitment in return. 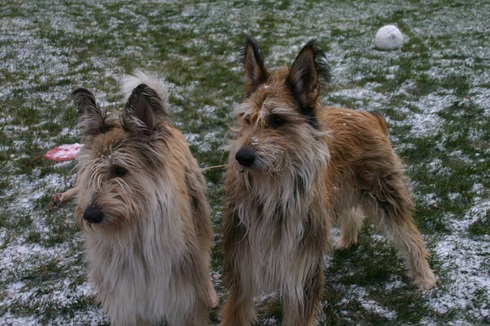