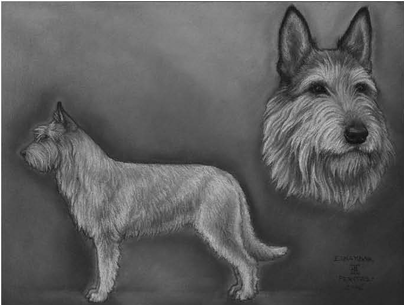 BRIEF HISTORICAL SUMMARY : The Picardy Sheepdog has very ancient origins. Of course it is not certain that the Picardy Shepherd originates strictly from the Picardie region; it is possible, even probable, that it was widerspread as harsh-coated sheep and cattle dogs were typical throughout north west Europe. In 1863, the first Picardies were judged at a show in the same class as Beaucerons and Briards. In 1898 it became evident that the Picardy was a breed. Paul Megnin drafted the first standard in 1922. The breed obtained definitive recognition in 1925. The breed stagnated somewhat until the second world war and it was only afterwards that fanciers, who wanted to revive interest in the breed, began searching in Picardie, at the source, for the most typical subjects for breeding. After many years, during which the Breed Club had difficulties in obtaining official recognition, Mr. Robert Montenot, an eminent dog specialist, created the “Les Amis du Berger Picard” Club in 1955. The club obtained definitive recognition in 1959 and a new breed standard was approved by the S.C.C. in 1964. The present standard was drawn up by Mr. J.C. Larive, President of the Club, and his committee in collaboration with Mr. R. Triquet.

GENERAL APPEARANCE:  The Picardy Shepherd is a medium-sized dog. It is solid, hardy, well muscled and well built without ever being heavy. It remains very elegant whether standing or in action. Its lively and alert expression is characterized by its rugged appearance.

IMPORTANT PROPORTIONS: The Picardy Sheepdog is mediolinear (of medium proportions). The length of the body, from the point of the shoulder to the point of buttock, should be slightly more than the height at the withers (from 5 to 8%). Females are generally a little longer than males. The skull and muzzle are of equal length. The distance from the elbow to the ground is equal to half the height at withers.

BEHAVIOUR/TEMPERAMENT: The Picardy Sheepdog is even tempered. It is neither aggressive, shy nor nervous. It should be both obedient
and fearless. These qualities enable it to easily accomplish its work which consists of driving and protecting flocks of sheep. It is also a very good guard for the home and an excellent family dog who enjoys close contact with children.

HEAD: Without being heavy, it should be in proportion to the size. Delicately chiselled, it should not give the impression of being pointed. Seen from the side, the lines of the skull and muzzle are parallel. The type is stamped by the rugged aspect; distinct eyebrows (hair approximately 4cm long and which should not veil the eyes) along with beard and moustaches.

Skull : Seen from the front, the forehead should not be flat but slightly convex, with a minimal depression in the middle.

Stop : Only slightly defined; it is placed at equal distance from the occiput and the tip of the nose.

Muzzle : Strong and not too long. It should not end in a point. The nosebridge is straight. Presence of thin beard and moustaches.

Cheeks : Should be moderately round.

Eyes : Horizontal, of medium size, oval, not prominent, dark colour (the colour can be more or less dark depending on that of the coat, but
never lighter than hazel).

Ears : Of moderate size, wide at set-on, high set, always carried naturally erect with slightly rounded tips. A diverging carriage is tolerated,              but not sought after.

NECK : Strong and muscled, of reasonable length, springing cleanly from the shoulders to allow for proud carriage.

BODY : The bone structure is solid, without exaggeration, and the muscles are lean.

Croup : Sloping slightly and progressively into the buttocks.

Chest : Reaches the elbows but not beyond. The correct chest perimeter measurement, taken immediately behind the elbows, is superior by
1/5th to the height at withers. The ribs are well sprung at the top then gradually flatten towards the sternum.

TAIL : Naturally long.  At rest, it should reach the point of the hock joint and be slightly curved at the tip. In action, it can be carried higher but never over the back. The hair on the tail is the same length as that on the body.

FOREQUARTERS : Upright, seen from the front and  side.

Elbow : Tight to the body.

HINDQUARTERS : Parallel seen from behind and upright seen from the side.

Hock : Moderately bent; neither too open or closed.

GAIT/MOVEMENT : Supple and free. Giving the impression of being both elegant and effortless. Moderate reach of forelegs; limbs remaining parallel.

HAIR : Harsh, semi-long. It should feel crisp when touched. Should measure from 5 to 6 cms over the entire body including the tail. Fine, dense undercoat.

COLOUR : Fawn, fawn with dark overlay, fawn brindle and grey which generally remains dark. Without any large white patches (a slight white mark is tolerated on the forechest and the end of the feet).

SKIN : + Tight-fitting, without folds or dewlap.

FAULTS: Any departure from the foregoing points should be considered a fault and the seriousness with which the fault should be regarded should be in exact proportion to its degree and its effect upon the health and welfare of the dog.

N.B.: Males should have two apparently normal testicles fully descended into the scrotum. 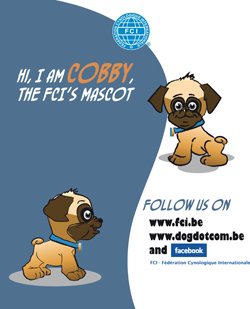